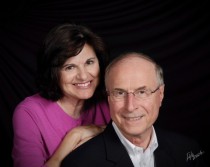 ﻿John and Teri Bosio have been married 42 years and have two daughters, a son-in-law, and a grandson.  They live in Nashville, TN.  They led religious education and marriage enrichment programs at the parish and diocesan level for most of their married life.  They served on the staff of the Archdiocese of Kansas City, in Kansas as Family Life Coordinators.  John has a Master’s Degree in Theology and a Master’s Degree in Counseling.  For 13 years he served three parishes in Kansas as a marriage and family therapist.  Teri has many years of parish ministry experience as Adult Formation and RCIA Director, and Director of Religious Education.

John and Teri wrote Joined by Grace, Preparing for the Sacramental Journey of Marriage, an award winning Marriage Preparation program, published by Ave Maria Press, with video from Spirit Juice Studios. John and Teri produced SIX DATES for Catholic Couples, which is based on John’s first book: Happy Together: The Catholic Blueprint for a Loving Marriage, (Twenty-Third Publications, 2008.)  His second book, Blessed is Marriage: A Guide to the Beatitudes for Catholic Couples was released in March 2012, (Twenty-Third Publications).  This book was accompanied by a second video series:The BEATITIDES: A Couple’s Path to Greater Joy.﻿  John also published Why Get Married in the Church in 2013

John and Teri continue their ministry to families and couples by conducting workshops and leading retreats around the country.﻿

In 2016 they completed work on Joined by Grace, Preparing for the Sacramental Journet of Marriage, a new marriage preparation program publieshed by Ave Maria Press.